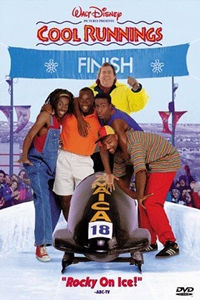 Cool Runnings fictionalizes the true story of a bobsledding team from Jamaica making it to the Olympics. The tale begins when Derice Bannock (Leon), realizing that due to an accident his chances of qualifying for Jamaica's 1988 Olympic track team are dashed, scrounges around looking for another sport for the competition. Since ex-United States gold medal bobsledding winner Irv Blitzer (John Candy) now lives in Jamaica, Derice chooses bobsledding, convincing Irv to coach the team. Derice then forms his team. He gets his friend Sanka Cofie (Doug E. Doug) to join up and recruits Junior Bevil (Rawle D. Lewis), a young man who lacks self-confidence, and Yul Brenner (Malik Yoba), a disagreeable and bitter malcontent. After setbacks and near disasters, the group jells as team members and they head off to the Olympics to compete for an Olympic spot.~ Paul Brenner, All Movie Guide