Contemporary viewers who go into Dishonored expecting a musty, dated espionage melodrama will be in for a surprise. Marlene Dietrich delivers a subtle and witty performance as a Viennese prostitute who offers her services as a spy during WWI. As Agent X-27 our heroine proves invaluable to her superiors, seducing and betraying enemy officers with the greatest of ease. But when she falls in love with Russian spy Lt. Kranau (Victor McLaglen), she permits him to escape her clutches, and as a consequence is sentenced to be executed. Ever the mistress of her own fate, X-27 stands proud and tall before the firing squad, even comforting the officer in charge (Barry Norton) who can't bring himself to shoot a woman. The scenes between Dietrich and bemedalled general Warner Oland are in themselves worthy of the admission price; equally as entertaining is the brief sequence in which the jaded heroine disguises herself as a zaftig peasant girl.~ Hal Erickson, All Movie Guide 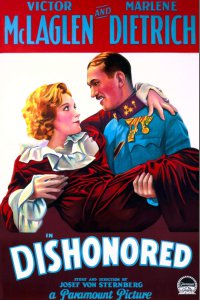 Rating:PG
Parental GuidanceGeneral viewing, but some scenes may be unsuitable for young children. A PG film should not unsettle a child aged around eight or older. Unaccompanied children of any age may watch, but parents are advised to consider whether the content may upset younger, or more sensitive, children.
Advisory:Contains mild violence and sex references
Country: United States
Language: English
Released:04/04/1931
Duration: 91 min
Genres: Classic Drama Romance War