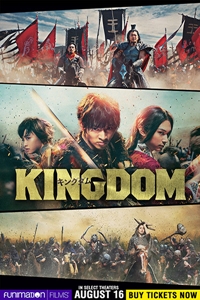 Orphaned by war, a young boy and his friend dream of changing their fate and becoming the world's greatest generals. And after his friend sacrifices himself to protect the future emperor, the young boy's path to greatness is set in motion. Helping the King reclaim the throne puts the boy's blade to the ultimate test as they go against deadly assassins, large armies, and the dangerous mountain clan. In a country torn apart by war, only they can fight to unite the warring states!

Sorry, this is not available to stream in England at the moment