This classic British thriller was one of Alfred Hitchcock's first major international successes, and it introduced a number of the stylistic and thematic elements that became hallmarks of his later work. Richard Hannay (Robert Donat), a Canadian rancher on vacation in England, attends a music hall performance by Mr. Memory (Wylie Watson); in the midst of the show, shots ring out and Richard flees the theater. Moments later, a terrified woman (Lucie Mannheim) begs Richard to help her; back at his room, she tells him that she's a British spy whose life has been threatened by international agents waiting outside. Richard is certain that she's mad until she reappears at his door in the morning, near death with a knife in her back, a map in her hand, and muttering something about 39 Steps. Discovering that a group of thugs are indeed waiting outside, Richard slips away and takes the first train to the Scottish town on the dead woman's map. Richard learns that he's now wanted by the police for murder, and he must find a way to clear his name. He begins trying to do so with the help of a woman he meets en route, Pamela (Madeleine Carroll), who serves as his unwitting assistant, even after she tries to turn him in. The 39 Steps was later remade in 1959 and 1978 -- both without Hitchcock's participation.~ Mark Deming, All Movie Guide 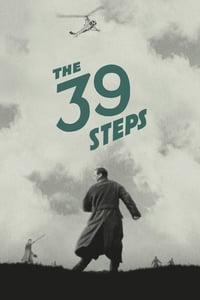 Rating:U
Universal - Suitable for allA U film should be suitable for audiences aged four years and over, although it is impossible to predict what might upset any particular child. U films should be set within a positive framework and should offer reassuring counterbalances to any violence, threat or horror. If a work is particularly suitable for pre-school children, this will be indicated in the BBFCinsight.
Advisory:Contains very mild language and violence
Country: United Kingdom
Language: English
Released:06/06/1935
Duration: 87 min
Genres: Action Suspense