Soviet director Dziga Vertov's experimental film grew out of his belief, shared by his editor, Elizaveta Svilova (who was also his wife), and his cinematographer, Mikhail Kaufman (also his brother), that the true goal of cinema should be to present life as it is lived. To that end, the filmmakers offer a day-in-the-life portrait of a city from dawn until dusk, though they actually shot their footage in several cities, including Moscow, Kiev, and Odessa. After an opening statement, there are no words in the film (neither voice-over nor titles), just dazzling imagery, kinetically edited - as a celebration of the modern city with a marked emphasis on its buildings and machinery. The Image Entertainment DVD edition of the film offers a musical score composed from notes left by the director, which adds greatly to the impact of the film.~ Tom Wiener, All Movie Guide 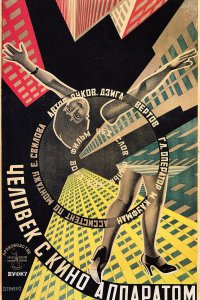 Rating:U
Universal - Suitable for allA U film should be suitable for audiences aged four years and over, although it is impossible to predict what might upset any particular child. U films should be set within a positive framework and should offer reassuring counterbalances to any violence, threat or horror. If a work is particularly suitable for pre-school children, this will be indicated in the BBFCinsight.
Advisory:funeral and childbirth images
Country: USSR, Ukraine
Language: Russian
Released:12/05/1929
Duration: 80 min
Genres: Documentary

The Man with a Movie Camera (Chelovek s kino-apparatom)