A silent, black and white movie produced in 1925. A mysterious phantom haunts the Opera of Paris. He threatens famous lyric singer, Carlotta, forcing her to give up her role to unknown Christine Daae. Eventually, Christine meets the masked phantom in the catacombs, where he resides. Considered a classic horror film. 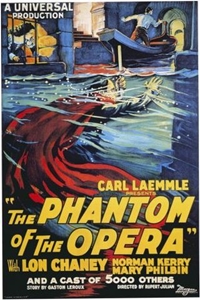 Rating:PG
Parental GuidanceGeneral viewing, but some scenes may be unsuitable for young children. A PG film should not unsettle a child aged around eight or older. Unaccompanied children of any age may watch, but parents are advised to consider whether the content may upset younger, or more sensitive, children.
Advisory:Contains mild horror
Country: United States
Language: English
Released:15/11/1925
Duration: 79 min
Genres: Drama Horror