This is a story of two of the greatest writers of the past century, Truman Capote and Tennessee Williams who are examined in a dialogue that stretches from their early days of friendship to their final, unsparing critiques of each other. Giving life to the dialogue and a physicality to their relationship, Jim Parsons is Capote and Williams is Zachary Qiunto; both are icons and yet anti-heroes, in an era that has become glutted with one-named celebrities: it's time for a return to the originals. The two men themselves, as they lived their own life stories, embody the present more than the subjects they confronted in their works. 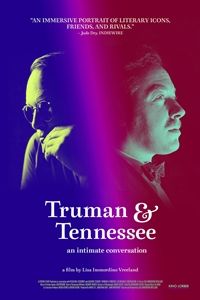 Sorry, Truman & Tennessee: An Intimate Conversation is not available to watch at home in United States at the moment